That’s the one thing Brace Cordova is convinced of when he’s released from a five-year stretch in a military prison. He figures the best he can do is spend the rest of his days as a freighter pilot and vicariously live out his dream of a Commonwealth Fleet career through his cousin, Commander Letessa Cordova.

His plans unravel when he’s accosted by gangsters, rescued by smugglers, and swept up in the search for an ancient Earth relic. With a vengeful crime lord and a Commonwealth Fleet gunship both hot on his heels, Brace soon realizes he might not live long enough to ever get a taste of the quiet life. 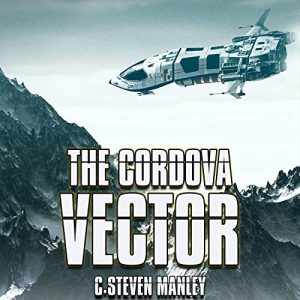 This is the first time I’ve read (figuratively read, since I listened to the audio book) anything by C. Steven Manley. He does a great job with world-building. Environments are seamlessly knitted into the story, adding depth to the narrative without getting in the way. One part of the world-building I especially enjoyed was the peek into ship navigation. Okay, so that might not be most exciting thing, but I enjoyed it because it sounded so plausible, so matter-of-fact.

Typically I don’t like trilogies or stories that span more than one book. But in this case I made an exception to listen to the first in the trilogy, expecting it to end on a cliffhanger. It did, though I won’t discuss because the author might hunt me down.

Being my second audio book, I’ve still not quite settled with the idea of a stranger reading to me. But I know this is completely my own hang up and shouldn’t reflect negatively on the author, story, or narrator. Although it is convenient to have a story whisk you away while plodding out a 5K on a treadmill.

Overall, a good book (audio), one you should consider checking out.

Terrors of Pangaea
Scroll to top