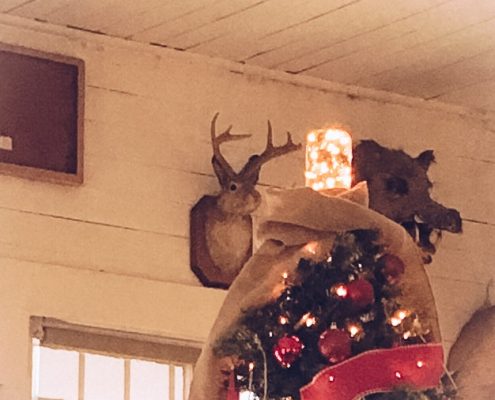 No one knows when the tradition began.

Some old timers would say it was during the lean years, when the deer and hogs dwindled close to extinction.

One toothless drunkdard claimed it began with Isaiah Tumbler. The fertile widower had five kids to feed and one can of green beans. In search of a Christmas miracle, he dumped the can in a nearby field. Shortly, jackalopes arrived to eat the green beans. He shot many, filling his sack to overflowing. Jackalope meat kept his family alive through the harsh winter. And to pass the time, Isaiah carved toy figurines for his children with the jackalope antlers.

In many parts of the country, the Christmas Jackalope has replaced Santa. On Christmas Eve parents tell their children to leave cans of green beans on window sills. Hungry jackalopes, gifts stuck on their antlers, are waiting just outside to come in, prowling for food. Grateful, they’ll exchange their gifts for the green beans.

Millions of kids wake on Christmas Day to find gifts with holes punched in the wrapping and empty green bean cans on the floor.