On a planet plagued by perpetual war, where a mech is a prerequisite for survival, there is one simple rule: Be bigger than the other guy or get your ass kicked. 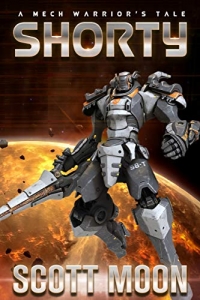 At just seventeen measly tons, Shorty doesn’t measure up. His enemies can level cities and punch holes through mountains. They can reshape the world on a whim. They wouldn’t be caught dead in an overgrown trashcan like Shorty.

But Shorty isn’t interested in the rule of size.

Shorty has a new rule, and he’s about to teach it to everyone.

Ass-kicking doesn’t have a size requirement.

If mech on mech violence disturbs you, then don’t read. But if you like mechs duking it out on a planet battlefield littered with the dismantled carcasses of the losers, then this short story is for you.

It begins with a runt of a mech, affectionately nicknamed Shorty, and a mech pilot that has learned to navigate the turbulent waters of a planet battlefield. The years he’s spent on planet has given him keen insight into the situation he’s facing. And that’s what makes this an enjoyable story. It’s the personality the author (Scott) has given the pilot. He’s brash (the mech pilot, not the author) but vulnerable. In every decision made, his life is the ultimate price to pay. He knows that, and even faced with that grim reality, marches on.

Scott does a good job of developing his story and characters through some nice world-building. I would’ve liked to have seen more, but then it probably wouldn’t be a short story anymore. There’s cussing sprinkled throughout and a couple of slightly suggestive moments. And of course, there is mech violence.

Pick up this quick read. For the mere pennies it costs, you’ll receive more than double the return in the way of entertainment. 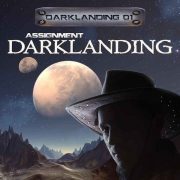 A frontier world. One Sheriff. And all the action one Spaceport can’t hold. Darklanding is the wild, wild west of known space.