PLAY TO WIN! FIGHT TO SURVIVE!

PerfectQuestion is back! He’s running and gunning his way across an incredible civilization-building game set on Mars. But this time he’s employed as an online ringer for a corrupt dictatorship and trying to avoid getting “disappeared” in a reckless world of intrigue, epic parties, sports cars, and women who are as dangerous as they are beautiful.

Five million in gold says he can do it and put the next Sultan on the throne by leading a rag-tag clan of gaming jihadis to victory, but revolution and revolt are afoot. The long knives are out in Calistan for the hero of Soda Pop Soldier and anyone else who gets in a murderous prince’s way. 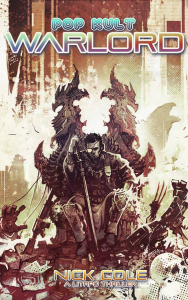 In 1985, fifteen year old me would hop a bus in Small Town, Texas, headed to the local mall. That was where all the good stuff went down. First, I’d swing by the arcade (next to Spencer’s) and cash in my rolled pennies for quarters. Then I’d find my go-to games; Galaga and Battlezone. Maybe even Zaxxon if I was feeling wild that day. After those quarters were spent, I’d wander to B. Dalton Books.

In the game section I’d rummage through the Dungeon and Dragon hardbacks. I’d see what was new and what already had the cellophane tore off so I could thumb through them. I read monster manuals like bedtime stories. New expansion modules were better than birthday cake. I don’t play anymore and it’s been decades since I last crayoned in the numbers on a new set of dice, but I still remember.

Nick’s stories bring memories like that back to me. Teenager days of my only worry being bus fare and penny rollers.

Pop Kult Warlord are three story threads in one. There’s the online gaming world that is the new economy, driven by massive mega companies who shape the geo-political state through virtual war. It’s the in your face FPS that’s nearly as real as it gets. Future society can be determined by who wins. It’s battle action on an epic scale. It brought back memories of immersive arcades, full of neon and bells.

The second thread is the saga of PerfectQuestion’s samurai discovery drama. It plays out as a grim tabletop RPG where each figurine movement is a new level of self understanding. It reminded me of those old D&D modules when I’d sit there on the B. Dalton floor and read them like a book, maps and all. As a bonus, this thread of the saga had a Ravenloft feel for me. I’m not sure why, but it did.

The last part, the real world for PerfectQuestion, is the troubling dystopia world where California has been overrun by Muslims and a new world, Calistan, has been carved out of American Sovereignty. There are two types of people left: those who do evil and embrace the evil because they want to be a part of it. The other type are those who remember what’s right and want to resurrect that, even willing to do at the expense of their life. Those people are the ones who want normalcy and a chance to live without oppression, without the fear of ending up dead in some ditch, no one ever questioning why. It’s an age-old struggle told only the way Nick can.

As I was listening to PKW’s audio book I thought, “This story’s like a cool version of Ready Player One!”

Pop Kult Warlord is book 2 in the Soda Pop Soldier series. I’ve read book 1 and enjoyed it. The good thing is that each story can stand on its own. That’s the way I like them; no cliffhangers needed to squeeze more quarters out of you. I wish more series were like this.