Blurb: A frontier world. One Sheriff. And all the action one Spaceport can’t hold. Darklanding is the wild, wild west of known space.
Sheriff Thaddeus Fry will never completely leave the battlefields of Centauri Prime. His new assignment, the Sheriff’s office of Darklanding, could be a do-nothing job, or it could get him killed.

The first thing he learns is that his predecessor’s headquarters were bombed, creating the vacancy that led to his appointment. The Company Man, is not who he expected, to say the least. His new accommodations are right in the center of Darklanding’s misfits. He finds one native of Ungwilook willing to talk to him and tries to make him a deputy. What really matters on Darklanding, are the mines.

Faced with a dangerous collapse that could kill hundreds of workers, he leaps into action and gets the story of Darklanding started. Fans of Firefly, Bonanza, and Tombstone will love this new series. Join us today and every 18 days, you’ll get a new episode of Darklanding. 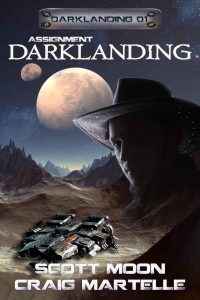 My Review: I’ve still been in this kind of rut.

Or maybe it’s not a rut, but a serious lack of attention. Maybe I’m suffering some sort of Millennial ADD… Whatever it is, it has been affecting my ability to finish a novel. I usually get bored about halfway through and end up setting the story aside. So lately I’ve just been reading short stories and novellas when I have free time.

Imagine my rut-like surprise when I discovered a new series being launched: Darklanding. The hook of the series is Firefly meets Tombstone. I’m one of the last people on Earth that has never watched Firefly, so the hook means nothing to me. But each Darklanding release is an ‘episode’ which generally means less than novel-sized. That meant something to me. I’ve been looking for a series of shorter reads, not three-book arcs like are popular nowadays. I’ve never read any work by Martelle or Moon, but the series sounded intriguing, so I thought I’d give it a whirl.

Thaddeus Fry is a man’s man (I’m not sure if this still means what I think it means, but I’m using it anyway). He’s a no nonsense dude who accepts the job as sheriff of a frontier town. Imagine the frontier town is a mining colony on a planet far removed from the hustle and bustle of civilized planets. The Old West, but out in space. The Old Space, I guess.

The first episode introduces you to Thad and a few other characters; the Company Man, bartenders, and mine workers. As the story goes along you begin to see wonderful flaws in each character. There are also aliens, and so far they’re friendly. In the first episode our hero (Thad) is quickly thrown into peril, which is a good thing, story-wise.

I enjoy the quick pace and length (around 30K). The plot moves along, but not at the expense of character development. There are hints of backstory sprinkled throughout, enough to keep you wanting to come back to see what shakes out of it all.

There are mild curse words, no sex, and a couple minor suggestive moments. I hope this trend continues.

This is a series I can invest in, each bite-sized episode able to be enjoyed and wrapped up over a couple of sittings. It’s great for those who are looking for entertaining reads without having to devote time plodding through a novel-sized story or a multi-book arc.